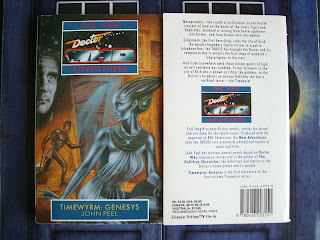 The Doctor and Ace.

Guest stars: Gilgamesh, legendary king of Uruk and Enkidu his hairy half-man first advisor, who turns out to be a Neanderthal; En-Gula, aged thirteen, a bare-breasted priestess of Ishtar; Avram the songsmith, he's going to end up writing the epic of Gilgamesh, isn't he.

Also starring: Ninani, fourteen-year-old princess of Kish; King Agga, her father; Dumuzi, high priest of and mainly possessed by Ishtar; Ennatum and Gudea, two of Gilgamesh's councillors who, unhappy with his rule, arrange for him to be ambushed while scouting Kish; Utnapishtim, legendary Noah figure who turns out to be an alien refugee; Urshanabi, one of Utnapishtim's crew.

Special guest villain: Qataka of Anu, masquerading as the Goddess Ishtar who evolves into the Timewyrm in the conclusion.

Where in Time and Space?

Earth, Mesopotamia, c2700 BC (also the planet Anu, far side of the Universe).

The Doctor finds an old hologram of himself warning about the Timewyrm. He sets the coordinates to track it down, and the TARDIS arrives in a grove outside the Mesopotamian city of Kish in time to rescue Gilgamesh and his friend Enkidu from an ambush by the Kishites. Ace's use of Nitro Nine explosive leads Gilgamesh to name her Aya Goddess of the Dawn, and the Doctor plays along claiming to be Ea, god of wisdom.

The Doctor is intrigued to see copper circuitry being fitted to the outer walls of Kish and goes to investigate, heading for the temple of Ishtar while Ace, Gilgamesh and Enkidu hang out in a local bar ostensibly looking for gossip, but mainly so that Gilgamesh can get drunk. Ace, however, meets Avram and he tells her that the goddess Ishtar is in Kish in person, and that she is killing people. So Ace heads swiftly to the temple to rescue the Doctor.

The Doctor, having penetrated the temple, realised something was wrong during a conversation with Dumuzi, roped En-Gula into to guiding him into the inner sanctum and allowed himself to be captured (using his respiratory bypass to avoid being sedated by the priestesses), is deeply annoyed to be rescued. But with the temple on fire, he has to leave with the others, including En-Gula and Avram, as Gilgamesh fights his way out of Kish.

They return to Gilgamesh's city of Uruk to regroup and plan, and to have a feast and show off Mr Peel's research. Ace spots that Gudea is acting guilty, and Gilgamesh hints he knows it too, so Ennatum has Gudea poisoned, and having completed his sub-plot is not seen again. At the feast, Avram sings a song he's made up about Utnapishtim. The Doctor guesses that two alien presences are probably related, so sends Ace, Gilgamesh and Avram off to find Utnapishtim and warn him about Ishtar. (Though this is probably a wild goose chase to keep Gilgamesh out of harm's way, and hence avoid damaging recorded history.)

The Doctor returns to Kish and on En-Gula's advice, seeks the aid of Princess Ninani, only to be caught by her father, King Agga. The King tells the Doctor that Ishtar has a box (in fact an atom bomb) with which she will destroy civilisation if she is harmed. He has the Doctor and party locked up. Ninani, however, releases them and they enter the temple. The Doctor confronts Ishtar, who he discovers to be a cybernetic half-woman half-serpent who controls people by injecting their brains with her probe circuits. Like you do.

Ace arrives in the nick once more, accompanied by Utnapishtim and Urshanabi on flying skimmers from their spaceship. A fight ensues, at the end of which Ishtar injects one of her probes into Ace's head. However, Utnapishtim had prepared them all for this eventuality, and had placed a computer virus in each of their minds which infects Ishtar and will destroy her.

Knowing that this will cause her bomb to detonate, the Doctor hurries them all back to the TARDIS where he extracts the probe from Ace's head and connects it to the TARDIS telepathic circuits in order to create the illusion that Ishtar's mind is still alive and thus gain enough time to disarm the bomb.

Unfortunately, Ishtar is able to transfer her consciousness to the TARDIS itself and takes control of the ship. The Doctor tricks her into moving her mind into the secondary console room and ejects her into the vortex.

Using the disassembled bomb, the Doctor repowers Utnapishtim's crashed ship, and gives them the coordinates of a habitable planet they can colonise. With peace agreed between Uruk and Kish too, at least for now, Ace and the Doctor leave. But as they go, they detect, at last, the Timewyrm bearing down on them in the vortex. It turns out to be Ishtar, who has integrated with the TARDIS components and evolved into something new. The Doctor tries to destroy her by by Time-Ramming both 'TARDISes' into one another, but she flees, and he vows to pursue her and set right what he has done.

The Doctor:
Ace:
We introduce the Timewyrm, who'll be around for the next three books too, a cosmic threat that the Time Lords have feared since the Dark Times, though she is little more than a novelty Cyberman with extra sadism circuits.

The Shadow of the Daleks?

The Dalek-shaped hole in the continuity becomes a looming presence in the New Adventures, particularly with the arrival of Benny, but you'd have expected more with Mr Peel's Dalek background than a couple of mentions of "The Daleks' Master Plan" (or, 'Buy my other books!').

The Doctor's dwelling on his dead companions, soon to become a cliché, comes across more as Peel advertising his earlier novelisations.

Ace is understandably pissed off at getting her memories wiped.

Nor is she especially chuffed to spend most of the adventure hanging out with Gilgamesh whose idea of a good time is fighting or raping. Yes, it uses the word "rape" quite a lot. Sorry.

Many, but all but one are "extras", mainly the many, many soldiers who are hacked to death by Gilgamesh.

Ishtar bumps off the crew of her fleeing spacecraft in the prologue. (We also hear about more victims of Ishtar with their brains sucked out.)

The only named character to die is the high priest Dumuzi, who is killed by Ishtar in one of those "villain proving how evil she is" moments.

Too Broad and Too Deep?

It's the back cover blurb of this novel that introduces the early NA mission statement: "Full-length science fiction novels; stories too broad and too deep for the small screen."

Peel mainly takes the series "more adult" remit in the "Torchwood" fashion to mean a lot more sex and violence, with a particularly unappealing fascination for early-teenage girls getting their breasts out. The descriptions of Gilgamesh and Enkidu chopping up the soldiers of Kish are pulpy and borderline pornographic too.

Many of these chapter titles are of the old-fashioned melodramatic sort, but others might have been used by the likes of Paul Cornell in his punning moments: "Band On The Run"; "Spying Tonight"; "When You Wish Upon Ishtar" (no, really); though it's unclear whether "Guardians At The Gate Of Dawn" wants to be Pink Floyd, "The Wind in the Willows" or merely pretentious. Mr Peel's 'Gun' tendency before the tribes were named is perhaps most extreme in his choice for a postmodern moment: "'Back off, bitch!' Ace yelled, doing her best Sigourney Weaver impression."

Why Should I Read This?

Because this is where it all begins.

Because it's the continuing adventures of Doctor Who. Because it's a piece of history – in both senses. Because the introductions by Peter Darvill-Evans and Sophie Aldred set the scene for the series. Because it starts off the whole range, almost all of which are better than this and will be flattered by the comparison, and starts off a four-book arc, absolutely all of the rest of which are better than this. Because you don't want to miss Terrance Dicks' tour-de-force "Timewyrm: Exodus" or Paul Cornell's glorious debut novel "Timewyrm: Revelation". And because it's not that bad, if you can ignore all the sex, which is repellent not because it's 'adult' but because it's shallow, terribly written, and non-consensual in far too many ways.

It all begins here.
Posted by Millennium Dome at 19:00